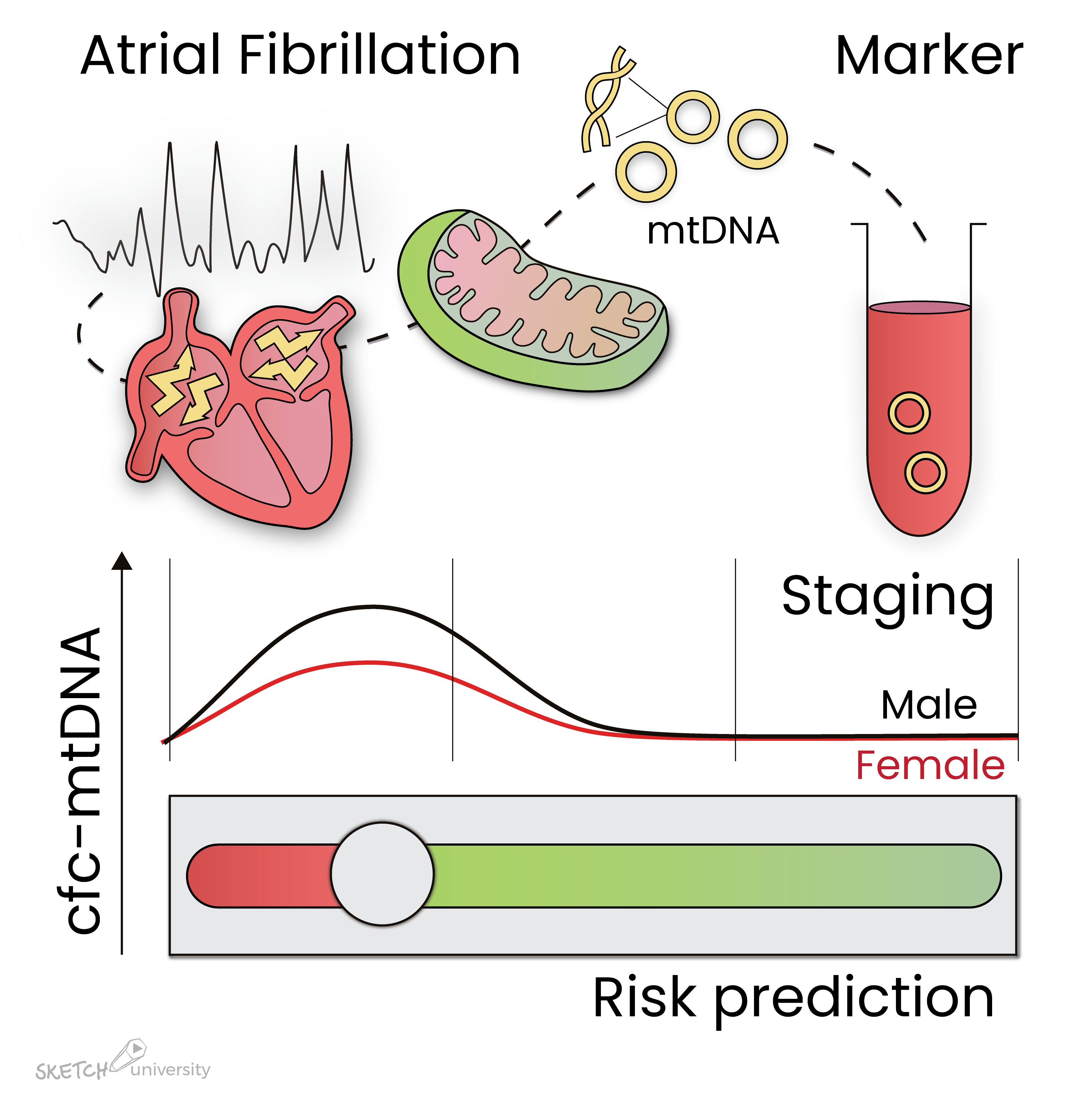 Atrial fibrillation (AF) is the most common progressive cardiac tachyarrhythmia globally. AF is present in 3% of the total population, with a higher prevalence in the elderly, and is associated with serious complications such as stroke, heart failure, impaired cognitive function, and increased mortality. Early recognition of AF is essential to prevent disease progression from recurrent intermitted episodes to finally the permanent AF stage. This progression is accompanied by a gradual increase in therapy failure and the end-stage can, even with extensive therapy, not be treated.

At present, AF can only be diagnosed with a surface electrocardiogram when a patient already suffers from AF. In addition, this rhythm registration cannot assess the stage of AF, which is essential for selection of the appropriate therapy. Hence, early recognition of AF and the start of effective treatment is seriously hampered. Therefore, there is an urgent need to develop successful diagnostic biomarkers for AF.

The use of serum biomarkers is an interesting approach to assess (patho)physiological processes and therapeutic responses. Serum biomarkers are used in the identification and management of several diseases, including heart failure, myocardial infarction, cancer, and diabetes. So far, no specific serum biomarkers to assess AF stage and to predict the outcome of AF treatment are available. Nevertheless, several AF serum biomarkers, such as troponin (myocardial injury), brain natriuretic peptide (cardiovascular stress), creatinine (renal dysfunction), C-reactive protein (inflammation), and fibroblast growth factor 23, have been associated with AF pathology. Only in 2016, the European Society of Cardiology implemented the use of troponin and natriuretic peptide into their guidelines, to predict stroke and bleeding risk in AF patients.

Cell-free circulating mitochondrial DNA (cfc-mtDNA) is successfully used as a biomarker for conditions associated with mitochondrial dysfunction or stress, such as cancer progression, cardiac arrest survival, and diabetes mellitus. Cfc-mtDNA acts as a damage-associated pattern (DAMP), causing inflammation, which might be associated with the inflammation seen in AF patients and an experimental mouse model for AF. We recently observed mitochondrial dysfunction to underlie experimental and human AF (Wiersma Cells 2019). As mitochondrial dysfunction may initiate the release of cfc-mtDNA in the circulation, we sought to evaluate the value of cfc-mtDNA as a blood-based marker for AF stage, sex differences, and AF recurrence after treatment, in a population of patients undergoing AF treatment (electrical cardioversion (ECV) or pulmonary vein isolation (PVI)) or cardiac surgery.

The findings suggest that cfc-mtDNA is associated with AF stage, especially in males, and with patients at risk for AF recurrence after treatment.

Figure 1: Atrial fibrillation (AF) causes damage to the mitochondria in the atria, which result in the release of mtDNA in the circulation. During paroxysmal AF, mtDNA levels are increased, especially in male patients, and reduce again during progression of the arrhythmia.  In addition, mtDNA levels are elevated in patients who reveal recurrence of AF after ablative therapy. Therefore, mtDNA levels may represent a marker to stage AF and predict AF recurrence after treatment.

Furthermore, we thank Sketch University for design of the graphic abstract.

The AFIP foundation consists out of researchers and doctors who aim to improve communication between patients and researchers within the field of Atrial Fibrillation. Together we can stop this heart disease. DONATE NOW
AFIP PARTNERS

This website uses cookies to improve your experience while you navigate through the website. Out of these, the cookies that are categorized as necessary are stored on your browser as they are essential for the working of basic functionalities of the website. We also use third-party cookies that help us analyze and understand how you use this website. These cookies will be stored in your browser only with your consent. You also have the option to opt-out of these cookies. But opting out of some of these cookies may affect your browsing experience.
Necessary Always Enabled

Any cookies that may not be particularly necessary for the website to function and is used specifically to collect user personal data via analytics, ads, other embedded contents are termed as non-necessary cookies. It is mandatory to procure user consent prior to running these cookies on your website.